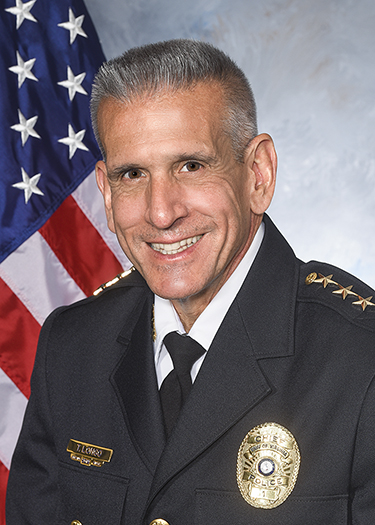 As Associate Vice President for Safety and Security and Chief of Police, Tim Longo oversees the University Police Department, the department of Emergency Management, Clery Compliance and Youth Protection, Threat Assessment, and Safety and Security Systems and Technology. He brings 40 years of experience in law enforcement leadership and higher education to his role.

Longo joined the Baltimore Police Department in the early 1980s, rising to position of Police Colonel/Chief of Technical Services. During his years of service with the department, he served in three of the nine patrol districts and was the District Commander of the Southeastern District. Additionally, he served as the Commanding Officer on the Special Investigation Section within the Internal Investigation Division, was the Director of the Emergency Communications Division, and the Chief of Staff to the Police Commissioner. He retired from the Baltimore Police Department in 2000.

While in Baltimore, Longo earned his undergraduate degree from Towson University, and his Juris Doctor from the University of Baltimore Law School. He was admitted to the Maryland Bar in 1993.

Longo worked briefly as consultant in the District of Columbia for a firm that focused on law enforcement matters. During his consultancy, he oversaw an audit of the District of Columbia police department’s emergency communication center, the South Pasadena Police Department’s emergency communications center, and the Denver Police Department’s Internal Affairs function. He also assisted in agency audits in Belmont, Ohio, and Fort Lauderdale, Florida.

During his tenure as the Chief of Police in Charlottesville, Longo was responsible for providing leadership over several high profile investigations that impacted the University of Virginia community: the murder of student athlete Yeardley Love, the disappearance and murder of second-year student Hannah Graham, and the investigation into allegations of sexual assault stemming from the 2014 article in the Rolling Stone magazine.

After more than 15 years, Longo retired from the Charlottesville police department in 2016. Later that year, he joined the faculty of the University of Virginia’s School of Continuing and Professional Studies (SCPS) to create a master’s degree in public safety that addresses such issues as the challenges of 21st-centuy policing and the evolving role of law enforcement in serving the communities they protect. The program was approved by the Virginia State Council on Higher Education and is awaiting launch.

Longo also serves as an adjunct faculty member at the School of Law where he teaches a seminar of Police Use of Force, and guest lectures in a host of other programs related to the criminal justice system.

In addition to his primary law enforcement and educational endeavors, Chief Longo has served as part of a team of Independent Monitors appointed to conduct police department oversight on behalf of the Federal Courts in three cities across America. In addition to these responsibilities, he has served as a police practice expert on behalf of both plaintiffs and defendants in a variety of legal matters in state and federal courts pertaining to law enforcement and municipal policy and practice.